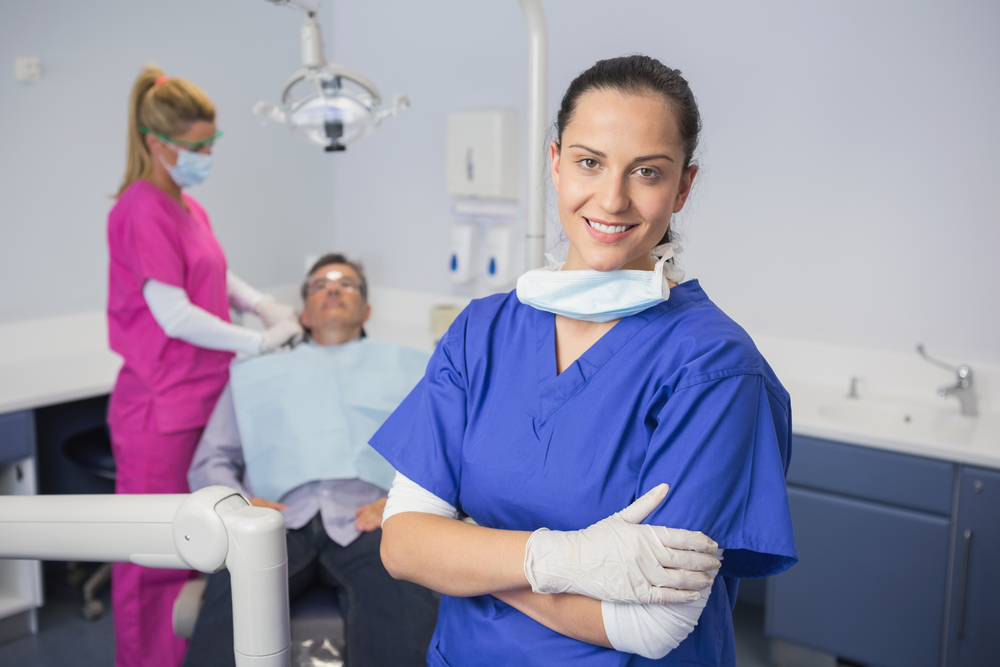 It has been said that one of the benefits of renting work uniforms is the ability to identify certain employees and the functions they perform. Uniform Rental Company Alsco says the practice is fairly common. This writer experienced it for the first time in late 2020. I was visiting my dentist’s office when I suddenly realized they had gone all Star Trek on me.

If you are not familiar with the Star Trek franchise, various personnel on the starship can be identified – in terms of their function – by the color of their uniforms. My dentist’s office had never taken this approach before. Maybe they hired a new office manager who just happens to be a Star Trek fan.

My initial arrival was not at all unusual. The three ladies stationed at reception were wearing their usual powder blue scrubs. It was winter, so two of them were wearing sweaters as well. Nothing seemed out of the ordinary.

This is what I was used to. For the longest time, everyone in the office wore powder blue. Come to think of it, most of the medical professionals I had encountered throughout the years wore the same color. Powder blue must be to the medical profession what olive green was to the U.S. military prior to the two Gulf wars.

Black for the Dental Assistant

At any rate, I was called from the waiting room by one of the office’s two dental assistants. She immediately caught me off guard when she appeared in the door wearing all black scrubs. Well, not all black. There was a bit of pink trim that popped quite nicely. Be that as it may, I was surprised to not see powder blue.

That particular morning, the dental assistant had a trainee with her. The trainee was also wearing black, but her scrubs had no pink trim. They were entirely black save the white embroidery of her name.

Purple for the Hygienist

Next to visit me in the exam room was the dental hygienist. She wasn’t going to do anything that day (I was in for root canal) but she did want to pop in and give my teeth the once over. It turns out her powder blue scrubs were gone, too. She was dressed in a plumb purple.

I admit that the black and pink scrubs were my favorite of the day. Yet the hygienist’s purple scrubs were a close second. I usually prefer a brighter, more royal shade of purple for clothing. But this plum shade was better suited to medical scrubs. I don’t think her scrubs would have looked as good in a bright purple.

Navy Blue for the Dentist

Last but not least, the dentist entered the exam room after everyone else was finished with me. He was donned in navy blue scrubs with black trim. The navy blue was just fine. However, I think his scrubs would have look better with gold or white trim. The black trim was barely noticeable.

It should be noted that he was the only one wearing navy blue. Anyone who knew the color scheme would have no problem picking him out of an inter-office lineup. And I guess that’s the point.

I now know what to expect when I visit my dentist. I can identify who is doing which job just by the color of the scrubs. And I will know even as old employees leave and new ones come on board. So I guess it’s true what they say. You can distinguish between employees and their job functions by the uniforms they wear.

How to Prevent Cavities in Children’s Teeth

4 Surprising Benefits of Rhinoplasty Nose Surgery for Men and Women

What are the Benefits of Invisalign Aligners?